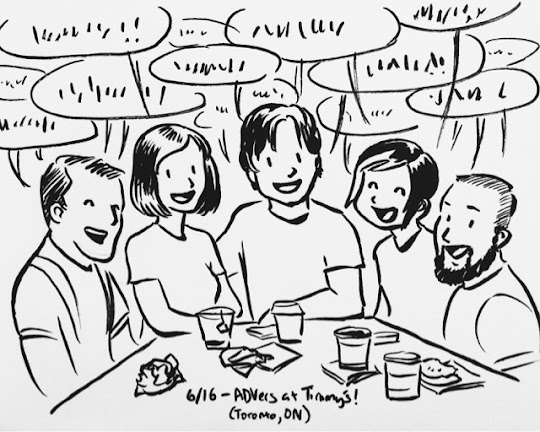 Super exciting day today, Davide and I rode up to a KTM demo ride to meet Neda and Gene of RideDOT! They’ve been traveling by motorcycle around the world for three years, and blogging it.

We also met up with fellow ADVer, Brent. Between all of us, we couldn’t run out of things to talk about and were hanging out at Tim Horton’s for hours! I kept drinking coffee and water but my tongue was going dry.

Also, the trip nearly came to an end in the parking lot of Tim Hortons when a lady pulled out without looking. Ha. I promised Gene I’d at least get across the border before having my bike totaled.

It’s difficult to sum up the impressions of that afternoon (I mean, besides awesome). It’s hard not to feel creepy, like you know someone already based on their blog, but still have so many questions and not know what to expect when meeting in person (you exist outside of the internet…woa). In many ways, we found things in common; even on the road a person needs hobbies, and Neda picked up needlepoint because it keeps her hands busy and also packs small. My hobby is knitting, for the same reasons. Also, in many ways, I admire Gene and Neda (because they’re so cool!). They have a unique perspective on the world, and someday, I would like to travel farther by motorbike too. I’m just not sure I want to go it solo…Gene mentioned I always seem to be surrounded by people – I guess I just don’t show the quieter moments as much, but also I wonder if traveling solo makes you more open to being absorbed into social circles? If I had a partner, would we be a more self-contained unit?

It’s hard enough to find people who can take their life on the road, I feel lucky to have Davide and Chris and anyone else I had the pleasure of sharing the road with for a few days. Also, for all the people I’ve met who have shared a bit of their lives or their homes with me.

Anyway, I loved meeting them and getting the inside scoop, and look forward to following them on their continued travels. What an amazing afternoon!

Back in town, Wally suggested Guu Izakaya for dinner with Ed, who showed up on his sweet old K series BMW. The meal was fantastic but it was the environment that struck me – in that windowless building, with all the chaos and shouting, we could very well have been in Japan.

Oh, and the Duke 390 is pretty fun. It’s powerful for its weight. I can stand flat footed, which is nice. The vibration might be too much for extended riding though, and you know I always think of that when trying out a bike.

New plan: Plop my van on top of a shipping contain

Tucked behind the trees is The Angler Grove.

The trestle bridge in the low desert sun. Eventual

Randy knows the ways to all the cool Pinnacles.

Hallo, it's time for a desert ride with my new fri

Greetings from next door of the military range. I

The Slabs in the setting sun.

Snapshots from the House of Dot.